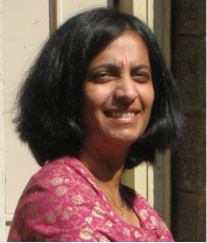 Kalyani Sukhatme was the project manager for the Mid-Infrared Instrument or MIRI, one of the four science instruments on the James Webb Space Telescope. She works at the NASA's Jet Propulsion Laboratory, or JPL, California Institute of Technology in Pasadena, Calif.

The daughter of two mathematics professors, Sukhatme grew up in Mumbai, India, where her interests in engineering and physics led her to her first degree - a Bachelor of Technology in engineering physics from the Indian Institute of Technology at Mumbai in 1993. At graduation, she was awarded the Institute Silver Medal for standing first in her class. She completed her masters in physics in 1995 from the University of California, Irvine or UCI. She obtained her doctorate in physics from UCI in 1997 for a thesis in low-temperature experimental physics.

Sukhatme has been at JPL full-time, starting as a postdoctoral fellow in 1998. During graduate school at UCI she received the Regents' Fellowship. At JPL she has won five team awards from 2004 to 2009, one individual outstanding accomplishment award in 2005, and one NASA group achievement award in 2006. She is the recipient of the European Space Agency James Webb Space Telescope award for significant achievement in 2012.

Sukhatme's research focuses around low-temperature transport properties on surfaces and Josephson junction behavior in superfluid Helium. She has contributed to the technology development of infrared detectors and their operation for spaceflight missions.

At JPL, she served as the test lead for the SPIRE instrument on the Herschel/Planck mission, which launched in May 2009. She led the MIRI Focal Plane Module or FPM development, delivering the flight and spare units in September 2009. After a brief interlude as the thermal lead on the ChemCam an instrument for the Mars Science Laboratory or MSL, she took over as MIRI project manager at JPL in April 2010.

In her spare time, she loves to read and listen to music.