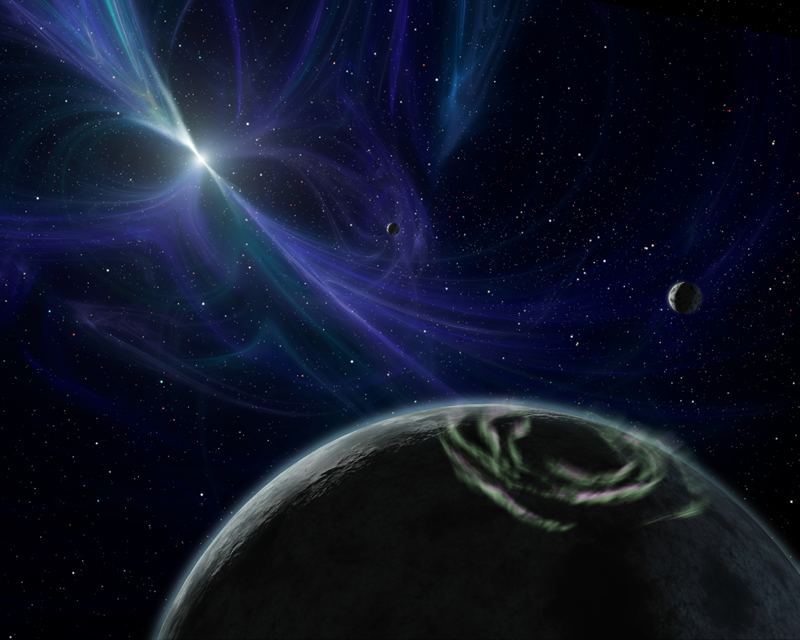 An artist's conception of PSR B1257+12's system of planets which does not involve a main sequence star like our own, but rather, a pulsar. Credit: NASA/JPL - Caltech R. Hurt (SSC)

The first solar system found outside our own did not involve a main sequence star like our own, but a pulsar. Unexpected to say the least.

Since then we have found thousands of exoplanets (and in every sort of star system imaginable), and we continue to narrow in on smaller and more earth-like planets. (See JPL's Planetquest website for the latest discoveries.)

One of the main uses of the James Webb Space Telescope will be to study the atmospheres of exoplanets, to search for the building blocks of life elsewhere in the universe. But Webb is an infrared telescope. How is this good for studying exoplanets?

One method Webb will use for studying exoplanets is the transit method, which means it will look for dimming of the light from a star as its planet passes between us and the star. (Astronomers call this a "transit".) Collaboration with ground-based telescopes can help us measure the mass of the planets, via the radial velocity technique (i.e., measuring the stellar wobble produced by the gravitational tug of a planet), and then Webb will do spectroscopy of the planet's atmosphere.

Webb will also carry coronagraphs to enable direct imaging of exoplanets near bright stars. The image of an exoplanet would just be a spot, not a grand panorama, but by studying that spot, we can learn a great deal about it. That includes its color, differences between winter and summer, vegetation, rotation, weather...How is this done? The answer again is spectroscopy.

The presence of sodium in the atmosphere of Hot Jupiter exoplanet HD 209458 is measured by studying its spectrum. Credit: A. Field, STScI

Spectroscopy is simply the science of measuring the intensity of light at different wavelengths. The graphical representations of these measurements are called spectra, and they are the key to unlocking the composition of exoplanet atmospheres.

When a planet passes in front of a star, the starlight passes through the planet's atmosphere. If, for example, the planet has sodium in its atmosphere, the spectrum of the star, added to that of the planet, will have what we call an "absorption line" in the place in the spectra where would expect to see sodium (see graphic below). This is because different elements and molecules absorb light at characteristic energies; and this is how we know where in a spectrum we might expect to see the signature of sodium (or methane or water) if it is present.

Why is an infrared telescope key to characterizing the atmospheres of these exoplanets? The benefit of making infrared observations is that it is at infrared wavelengths that molecules in the atmospheres of exoplanets have the largest number of spectral features. The ultimate goal, of course, is to find a planet with a similar atmosphere to that of Earth.

In addition to studying planets outside our solar system, scientists want to learn more about our own home. Webb actually complements NASA's other solar system missions, including those observatories on the ground, orbiting Earth, and in deep space. Data of different wavelengths and from different sources can help us build a broader, fuller picture of the objects in our solar system especially with the help of Webb's unprecedented improvements in sensitivity and resolution. Webb will observe Mars and the giant planets, minor planets like Pluto and Eris - and even the small bodies in our solar system: asteroids, comets, and Kuiper Belt Objects.

Webb will help us to understand the trace organics in Mars' atmosphere, and be used to do studies that verify the findings of the Mars rovers and landers. In the outer solar system, Webb's observations of the outer solar system will be used with Cassini's Saturn observations to give us a better picture of the seasonal weather on our giant gas planets. As for asteroids and other small bodies in our solar system - there are some features in the spectra of these objects that Earth-based observatories are blind to, but that Webb will be able to see. Webb will help us learn more about the mineralogy of these rocky objects.

There are many questions.

The first planet outside our solar system was discovered in 1992. Since then, we have discovered a multitude of planets around other stars. We have come to the realization that planets are in fact quite common. The ultimate objective of the search is to find planets orbiting in the habitable zone of their star, where it is possible for liquid water and perhaps even life to exist. 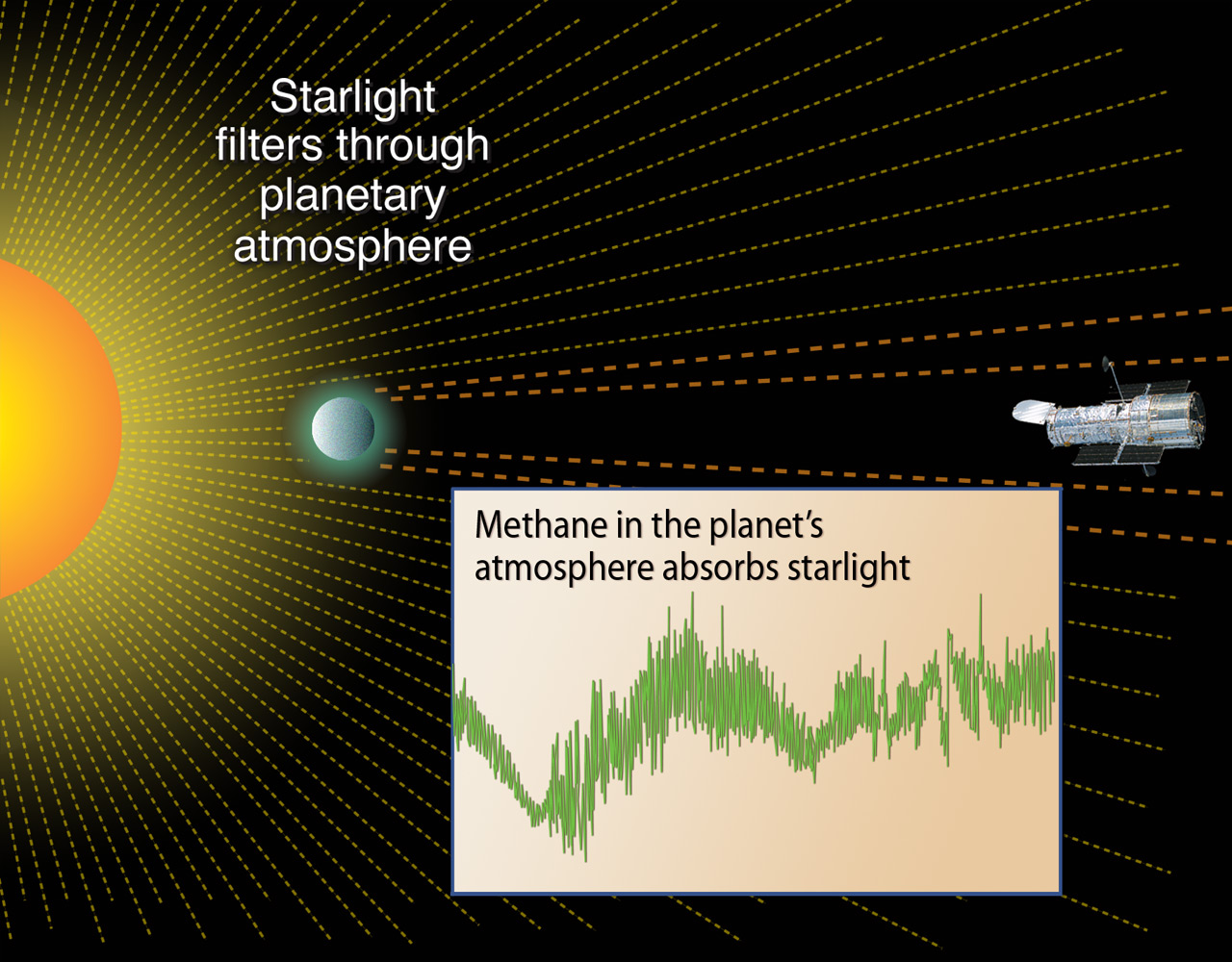 The presence of methane in the atmosphere of extrasolar planet 189733b is measured by the Hubble Space Telescope. Credit: NASA, ESA, and A. Feild (STScI)

To trace the origins of the Earth and life in the Universe, scientists need to study planet formation and evolution, including the material around stars where planets form. A key issue is to understand how the building blocks of planets are assembled. Scientists do not know if all planets in a planetary system form in place or travel inwards after forming in the outer reaches of the system. It is also not known how planets reach their ultimate orbits, or how large planets affect the smaller ones in solar systems like our own.

The icy bodies and dust in the outer reaches of our Solar System are evidence of conditions when our Solar System was very young. Scientists can directly compare those conditions to the objects and dust observed around other stars. The sensitive instruments on the James Webb Space Telescope will be able to obtain infrared images of giant planets and planetary systems and characterize their ages and masses by measuring their spectra. Webb will also be able to measure spectra of the disks around other stars to determine the constituents of such disks that give rise to planetary systems.

In addition to studying planets outside our solar system, scientists want to learn more about our own home. Webb will be powerful enough to identify and characterize comets and other icy bodies in the outermost reaches of our solar system (like objects in the Kuiper Belt and comets), which might contain clues to our origins on Earth.

Numerous science investigations in our own solar system will be enabled with Webb. The near- and mid-infrared spectral coverage and sensitivity afforded by Webb complements NASA's other Solar System missions, including spacecraft and rovers, as well as ground-based observatories. Webb will contribute to the overarching objectives of planetary science, namely to understand planet formation, evolution, and the suitability of planets as habitats. The suite of Solar System observations, of the planets, their moons, and other small bodies such as asteroids and comets, that will be enabled by Webb will advance our understanding of our own planetary system.

With Webb, searches can be conducted for organics in the Martian atmosphere. Even organics that are present only in trace amounts have signatures at infrared wavelengths that Webb will be able to detect due to the observatory's superb spectrometric sensitivities and high spatial resolutions. Credit: Figure provided by G. Villanueva, NASA /GSFC.

Webb's unprecedented sensitivity and spectral resolution is not common for most planetary missions, thus, huge advances in compositional studies will be made for most solar system targets. For example, Webb can search for molecules that may be signs of past/present life in the Martian atmosphere and conduct global studies that compliment the rover's/lander's findings. 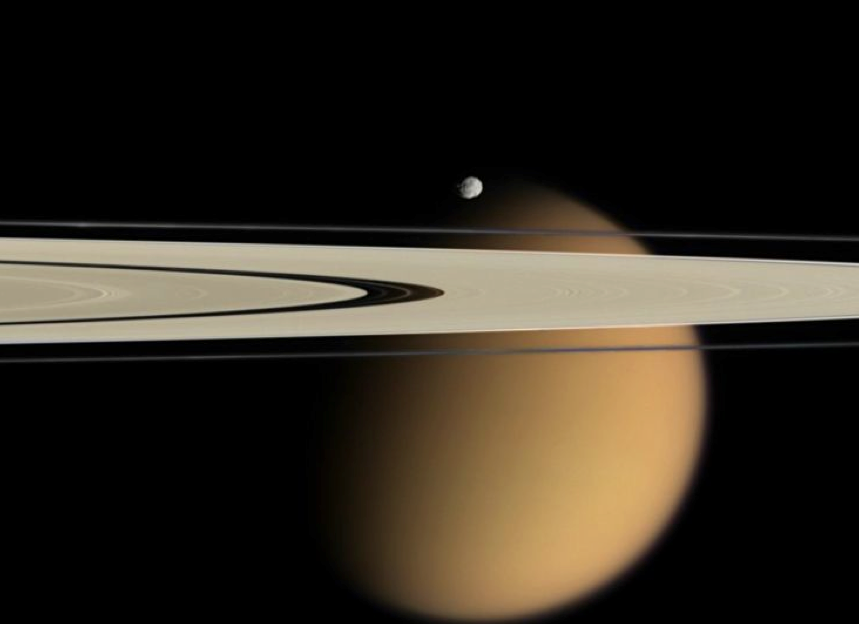 Image from Cassini of its moons Epimetheus and the smog-enshrouded Titan. Saturn's A and F rings stretch across the scene. Webb will be able to detect new moons, rings, watch storms, and monitor impact events of the giant planets. Credit: NASA/JPL/Space Science Institute

Webb will play a major role for planetary science when Cassini has completed its mission in 2017 and there are no other dedicated, active missions in the outer solar system for many years. Seasonal studies of the giant planets, as well as observations of new bodies and satellites will be significant for the next planetary missions.

In addition to studying planets outside our solar system, scientists want to learn more about our own home. Webb actually complements NASA's other solar system missions, including those observatories on the ground, orbiting Earth, and in deep space.