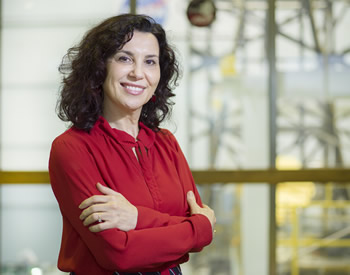 Dr. Begoña Vila is an Instrument Systems Engineer for the James Webb Space Telescope at NASA'snGoddard Space Flight Center in Greenbelt, Maryland. She supported Webb's cryogenic testing at NASA's Johnson Space Center in Houston in 2017, she will support testing for the observatory throughout 2018, and she is also helping plan Webb's commissioning. Vila actively engages in Spanish and English media interviews and outreach activities for the Webb program, including Science, Technology, Engineering, and Mathematics (STEM) events.

Webb's cryogenic testing inside Chamber A at Johnson was the one time the telescope's combined optics and science instruments (known by the acronym OTIS - the optical telescope and integrated science instrument module) would be tested together in an extremely cold, vacuum environment akin to that of space. Vila was the main point of contact for the testing of Webb's science instruments while OTIS was inside the chamber.

One particular test that Vila oversaw while OTIS was inside Chamber A was the validation of the closed-loop guidance system, which maintains Webb's pointing stability to the high level of precision required for science observations. The closed-loop system uses Webb's Fine Guidance Sensor (FGS), attitude control system and fine steering mirror to make adjustments every 64 milliseconds, if they are needed.

In 2016, Vila was the test director for the cryogenic testing of Webb's Integrated Science Instrument Module (ISIM) in Goddard's Space Environment Simulator. As the test director, Vila coordinated all teams involved with the testing to ensure the instruments were ready to be integrated with Webb's optical element to form OTIS.

"I enjoyed working with all the teams, and the sense of purpose I felt when planning and executing the test," explained Vila. "To meet the time requirements, we had to run multiple parallel activities...It was a great experience."

Vila's involvement with Webb began in 2006 when she was working with COM DEV International, the Canadian company that developed and tested the Fine Guidance Sensor (FGS) and Near Infrared Imager and Slitless Spectrograph (NIRISS) under the Canadian Space Agency (CSA), one of NASA's international partners. Vila worked with the CSA team to ensure all the tests, analysis, and requirements verifications were complete and the instruments were ready for delivery to NASA in 2012.

Vila received the NASA Exceptional Public Achievement Medal in 2016, which is awarded for a significant specific achievement or substantial improvement in operations, efficiency, service, financial savings, science, or technology that contributes to the mission of NASA. In 2017, Vila received the Wonenburger Planells Prize, which recognizes women in science from the Galicia region of Spain (where she was born).

Vila holds a Ph.D. in Astrophysics from the Jodrell Bank Centre for Astrophysics at the University of Manchester in England. She also has a degree in Physics and Astronomy from the University of Santiago de Compostela and Tenerife in Spain. In addition to these, Vila has a diploma in Spanish-English translation from the Chartered Institute of Linguists in London.

In her free time, Vila enjoys reading mystery novels, watching movies, and exercising, in particular yoga, dancing, kettlebells, walking, and pilates. Vila also enjoys playing the piano and going to musical events. She looks forward to opportunities to spend time with her three kids and her family and friends in Canada and Spain.